This post provides detailed analysis and an exploit achieving remote code execution for CVE-2020-10882, which was used at Pwn2Own 2019, on the TP-Link Archer C7:

This vulnerability allows network-adjacent attackers to execute arbitrary code on affected installations of TP-Link Archer A7 AC1750 routers. Authentication is not required to exploit this vulnerability.

Here, the debugging and most analysis are done in the router’s environment itself. There are instructions and writeups on how one can get the interactive shell from the router via USB-TTL device which would not be covered here. OpenWRT has helpful guides here and here that shows how to do that.

For code analysis, bindiffing approach was used to locate the vulnerable function. The vulnerable firmware and the patched version can be downloaded below:

Note that Archer C7 and A7 models share most of the binaries, so technically it does not matter if we are looking at the C7 or A7 firmware image.

The first thing that I did was to extract the MIPS (Big Endian) binaries from the firmware and load them into Ghidra. As i didn’t have much experiences on bindiffing on Ghidra, I followed the instructions on the BinDiffHelper project. Additionally, download and install bindiff6.

After using Ghidra and Bindiff, there were a few functions of very low similarity. 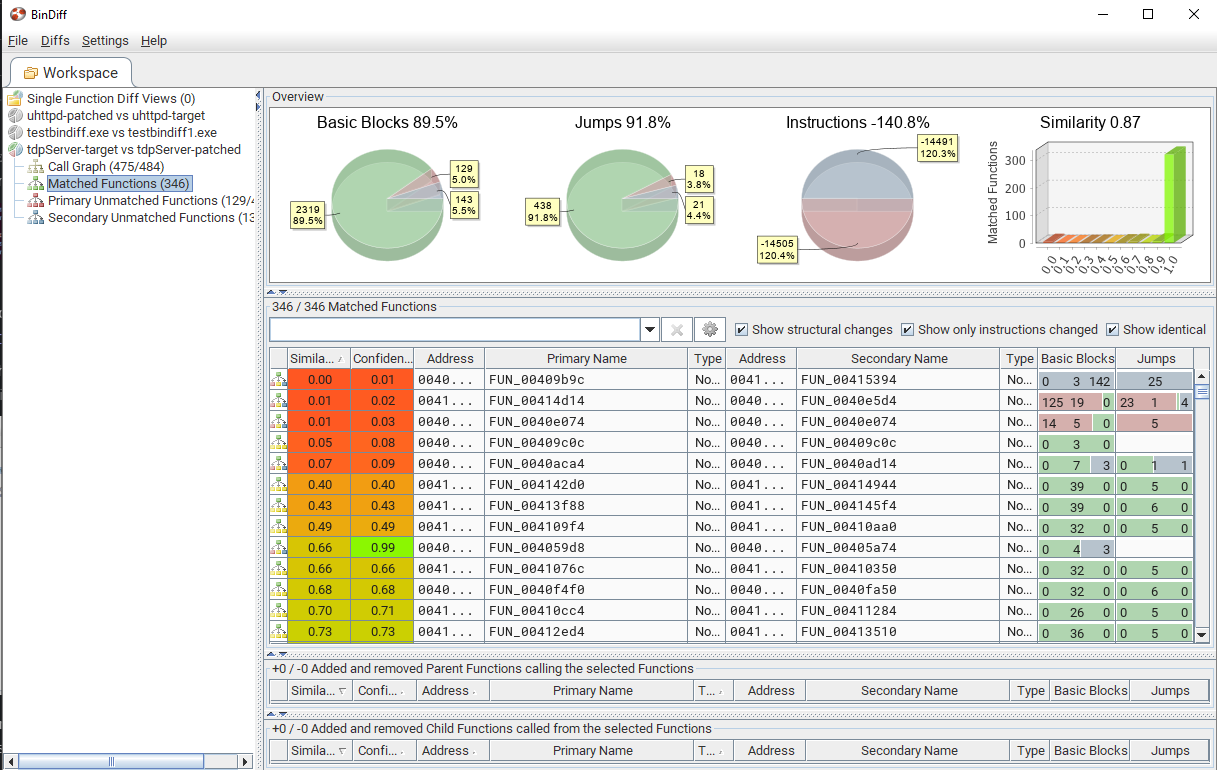 Tracing those addresses, I found that some are actually addresses of strings. However, only this FUN_00414D14 seems to be a function that points to a function. So perhaps, this might be the function that was vulnerable.

Here, I will show why this function seems to be the jackpot that we are looking for. Firstly, let’s refer to the CVE report description on the ZDI site (emphasis added):

From the description, we see a variable slave_mac being detailed in it. That seems to be the parameter that should be controlled. In the decompilation, I realised also that there are many verbose messages being dumped when this binary is being run. Could we do a simple string search?

Searching for slave_mac, there were a few results:

Clicking on the first search result, there are multiple places that contains the string slave_mac. This would help when we are deubgging the conditions around this slave_mac value.

Here we see there is also a reference to function FUN_00414d14. This means that this is one place where we can be interested in. For the other functions, Bindiff sees that there are most likely no differences in them.

Also there is the string "tdpUciInterface.c:644","About to get slave mac %s info" which is great to know that most likely this function is where the slave_mac is about to be obtained before parsing. This string has only one reference and that is the address 0x40e7e4. Here according to Bindiff, there is most likely no changes or differences.

The third string Failed tdp_onemesh_slave_mac_info! is found in the same function as the first string slave_mac in FUN_00414d14.

For the last string slave_mac_info, I am not able to find the reference to any function.

According to the CVE description, it mentions about system calls. To clarify, this likely means a call to the system() function and not direct system calls to the kernel. The plan now is to look for these function calls with parameters that attackers can potentially control.

Fortunately, there is one that looks promising. Under functions, we see that there are a number of callers. Specifically, there are at least 3 system calls in FUN_00414d14 which makes this function really interesting.

This means that we have narrowed it down to function 0x414d14. Of all the three system functions located, there is one that is interesting where the parameter to system() is not hardcoded:

In that vulnerable function, the parameter can be controlled via the slave_mac value and there are little to no checks in the router when parsing it from the JSON payload. This means that if we can craft a valid payload, we can eventually control what will be passed to system().

We can move on to the following after our analysis:

After getting an interactive shell from the router, it is possible to setup a HTTP server on your machine to transfer gdbserver.mipsbe to the router so that we can debug from our machine.

To set up the gdbserver, use the following commands on the target router:

This would cause the router to listen on this port that we want to debug on.

Now, on your machine, we have to make sure that we have gdb-multiarch installed and also set the architecture to “mips” and set the endianess to big:

Now that we can debug, we will want to now test the connection to the tdpServer.

Make sure that the router’s operation mode in the admin portal is set to “Router”. To connect to the tdpServer, we can send packets via UDP.

We can thus write a Python script to send data via UDP at port 20002:

After sending we can see that it registers the sn and the checksum to be 0x01010101 which means that it is possible to send packets to the router via UDP into port 20002. The output is from the running process which means it is really verbose and had helped tons when debugging.

We can see how that happens after reversing the tdp packet structure later on.

For this, reversing the decompiled code is crucial to understanding the format of the packet with the payloads and how it is being processed. There are some checks that are being carried out.

For starters, the payload consists of a 16 byte packet header followed by a maximum of 0x410 JSON payload that is being sent by a slave device.

Once those checks are done, the packet’s checksum would be calculated to check against the checksum that is in the packet’s header. If the checksum is correct, the payload would need to be decrypted with the IV and DecryptKey with AES_DECRYPT in CBC mode.

The encryption can be done with this Python snippet:

The decrypted payload would then be be parsed. These are the fields that the parser is looking out for:

Also, here is where the slave_mac field can be found which is also what we need to control.

Packet Under The Microscope#

To do just that, these breakpoints are being set to help in my debugging to show the different checkpoints during the analysis.

We can use these references to check if we are on the path to the targeted function.

Now just by sending out the data, we see that if the length of the data sent is within a valid range, it would check for the checksum which is located in the function 0x0040c9d0.

Here we would want to reverse that to see what it actually does.

In this cmp_new_and_old_checksum_FUN_0040c9d0 function, it would calculate the checksum and compare that against the current checksum.

Here the length of packet is checked again to make sure that it is within a valid range. After that, it would check that the buffer is not null. Once that is confirmed, it will check if the first byte is of byte one. Turns out, there are different versions of tdpServer and that this one only supports packet data with the value 0x1 in the first byte.

Note that a value is also taken at index 1 (recvBuffer[1]) and it gets checked if it is 0 or 0xF0. For this exploit, it has to be 0xF0 so that it is able to enter into a switch case where the flag is being checked. It can also be seen that the vulnerable code is within a switch case statement. To hit that, we need the switch case to be 7 to get case 6.

Here’s the relevant portion of the function:

With the help of useful debug messages, we find that the packet header contains the following structure :

Let’s take a look at this algorithm that was used to calculate the checksum that was decompiled. The checksum will calculate based on the entire packet. Its headers along with its content. All those bytes would be xor’d against a table and done with some extra arithmetic.

Since it is quite short, a quick & dirty way is to translate it into Python:

We later realised that it was actually a CRC-32 algorithm so now it is even easier to calculate the checksum.

This is a test script which encrypts and send some data in a packet.

Adding that to the end of the packet and sending it, we get a verbose log message confirming our encrypted payload has been successfully parsed:

Now we can decide on the message that we want to encrypt. Using those fields, I have the rough template.

Here the slave_mac field is used to print one character into a file p. There is a limit of 17 characters that we can place in this field. The way the command injection works here is as follows.

For the command injection to work, we need to terminate the Lua code string with single quotes. Two semicolon is then used to separate the commands like this.

Here we have already used 4 characters resulting with 13 left. The strategy used here is to append one character into a file, then send multiple packets to construct a complete script before executing the resulting file. We can do that with a shell command like printf and redirect it to a single character filename:

After setting it up in JSON format, it is time to encrypt with AES with the hardcoded IV and key.

Now append it to the payload header and update the length in the header as well. The checksum will be calculated with a stand-in magic value before replacing it with the newly calculated checksum.

Now all we need to do is to submit this and we should see a new file in the root directory called p.

To do a fuller exploit with a reverse shell, we can download busybox from our machine and use telnetd for a reverse shell by writing wget commands one character at a time into a file and running it.