On 13th September 2021, Google published the security advisory for Google Chrome. That advisory states that Google is aware of two vulnerabilities exploited in the wild, CVE-2021-30632 as RCE and CVE-2021-30633 as Sandbox Escape.

In this post, I will talk about the bypass sandbox vulnerability CVE-2021-30633. Man Yue Mo had published a very detailed blog post explaining CVE-2021-30632, which is a Type Confusion bug that leads to RCE in Chrome.

In summary, the sandbox bypass is made possible because of a Use-After-Free (UAF) bug in the IndexedDB API, chained with a Out-of-Bounds (OOB) Write bug in V8, and triggered via Mojo IPC connection. As a disclaimer, this is not a bug that I had found. I made this post to help me organise my thoughts to understand the bug and the exploit. I will carry out a root cause analysis of the Sandbox Escape and discuss my observation and understanding of the full-chain exploit.

It has been 4 months since the bugs had been patched. I believe it is relatively safe to publish an analysis of it. For this blog post, we will be using the last stable 64-bit release of Desktop Chrome for Linux before this issue was fixed, 93.0.4577.0 on Stable channel or 95.0.4638.0 on Dev channel.

Based on the description in the following commits, we are able to establish the type of bugs that the attacker might have used.

This attack surface is interesting because it exposes complex functionality directly to Javascript with MojoJS bindings. To understand the bug, you have to understand how Mojo interface a fair bit. It will be great if readers have gone through the pre-requisites and have some basic understanding of Mojo.

A short glance at the Vulnerability#

In order to exploit the bug, the vulnerability has to be studied in detail. CVE-2021-30633 is mentioned as Use after free in Indexed DB API and I have found 3 patches which might be related to this.

After reviewing the patches, we noticed that the most significant part of the patches is the addition of the function IsAcceptingRequests.

We will look at the patch in the TransactionImpl::Put. The gist of the patch is summarized below along with the snippet being the patched version.

In short, it means in the process of committing, or finished committing or was aborted, the transaction can not be executed. The newly added IsAcceptingRequests function checks for the 3 states of the transactions i.e. is_commit_pending_, COMMITTING and FINISHED.

Simply put, we need to control at least 1 of the 3 states and then hook up that state which means we can call some other requests while the transaction is on that state.

However, both function will end at IndexedDBConnection::RemoveTransaction() and we can not control anything after the transaction is removed. The control flow of is_commit_pending_ also end at IndexedDBTransaction::Abort() We can ignore it for the time being and focus on the COMMITTING state.

While tracing the control flow inside IndexedDBTransaction::Commit(), we found an interesting piece of code in the function IndexedDBBackingStore::Transaction::WriteNewBlobs()

Transaction will call 2 other services, blob_storage or file_system_access, to write committing data into the disk. You can check this in DB Data Path.

The interesting part here is the other service is executed asynchronously which means when writing is completed then it will call write_result_callback and continue to commit execution.

This happens in ::CommitPhaseOne() and after data has been written, it continues ::CommitPhaseTwo(). Fortunately, we can bind either blob_storage or file_system_access in renderer and hook up its operation, here is clone() request, you can see in the poc. In the clone() callback, we just hang the transaction at COMMITTING state and push some tasks into the transaction.

The next step, we will take over the other state of the transaction to raise the bug. To create an UAF, we thought it would be easy if we can free an object in clone() callback and then the continue committing will access freed object again but we are not able to find any object can be used in this pattern.

Luckily, I managed to find a cached raw object which can be used

In summary, no tasks should be scheduled during the committing process of transaction. This has several implications. But to fully understand what the bug really means to us, it is necessary to understand some core concepts of IndexedDB and understand the database mechanism. We also need some official documentation about IndexedDB features, designs and it’s implementation in chromium. The information in following links are what we require.

It will be great to read the following documentations in order to have a perspective on mojo, mojo binding and IndexedDB concept.

At this time, we got an UAF bug in browser side, exploit this bug could help we bypass the sandbox. We got two approach, the first is fake a virtual call like Virtually Unlimited Memory: Escaping the Chrome Sandbox and the second is force the browser creates new subprocess within --no-sandbox flag from Cleanly Escaping the Chrome Sandbox. In our exploit, as you can see, we can fake an entire object that could help us control rip as we want. But first, let’s see what we can do with the bug.

In short, we can free all external_objects_ in clone() callback and when return to write_result_callback, cached object was freed and trigger UAF. Like in snippet code above, after freed object only call: 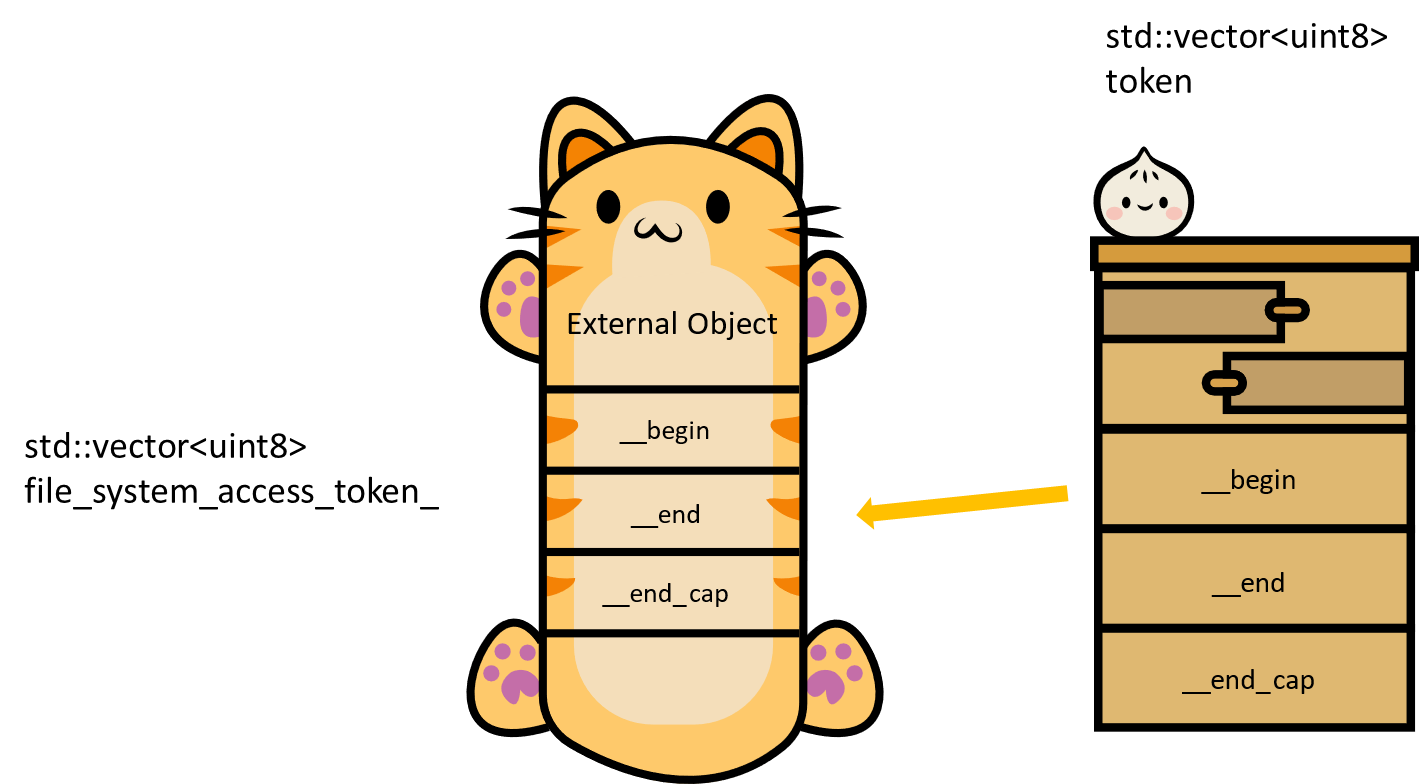 Control Over A Vector#

I’m not sure about how a vector is implemented, but we can see it contains three pointer which points to the heap that it control namely, begin, end and end_cap.

We gather two observations from here. First, we can leak heap pointer of a vector. Second, we can fake a vector in file_system_access_token_ which will point to any heap we want. Because vector’s operator= will automatically delete vector container if it exist, it means if file_system_access_token_ not null, it will be freed. So we can free any heap memory address by set a faked vector in freed object.

We only can get some leaked pointer but freed object can’t be controlled anymore. In order to have more options, we can free leaked vector and any object located on that heap memory (remember we can free any address). We can then set-up another UAF on whatever object we want.

The following are the steps for the exploit: 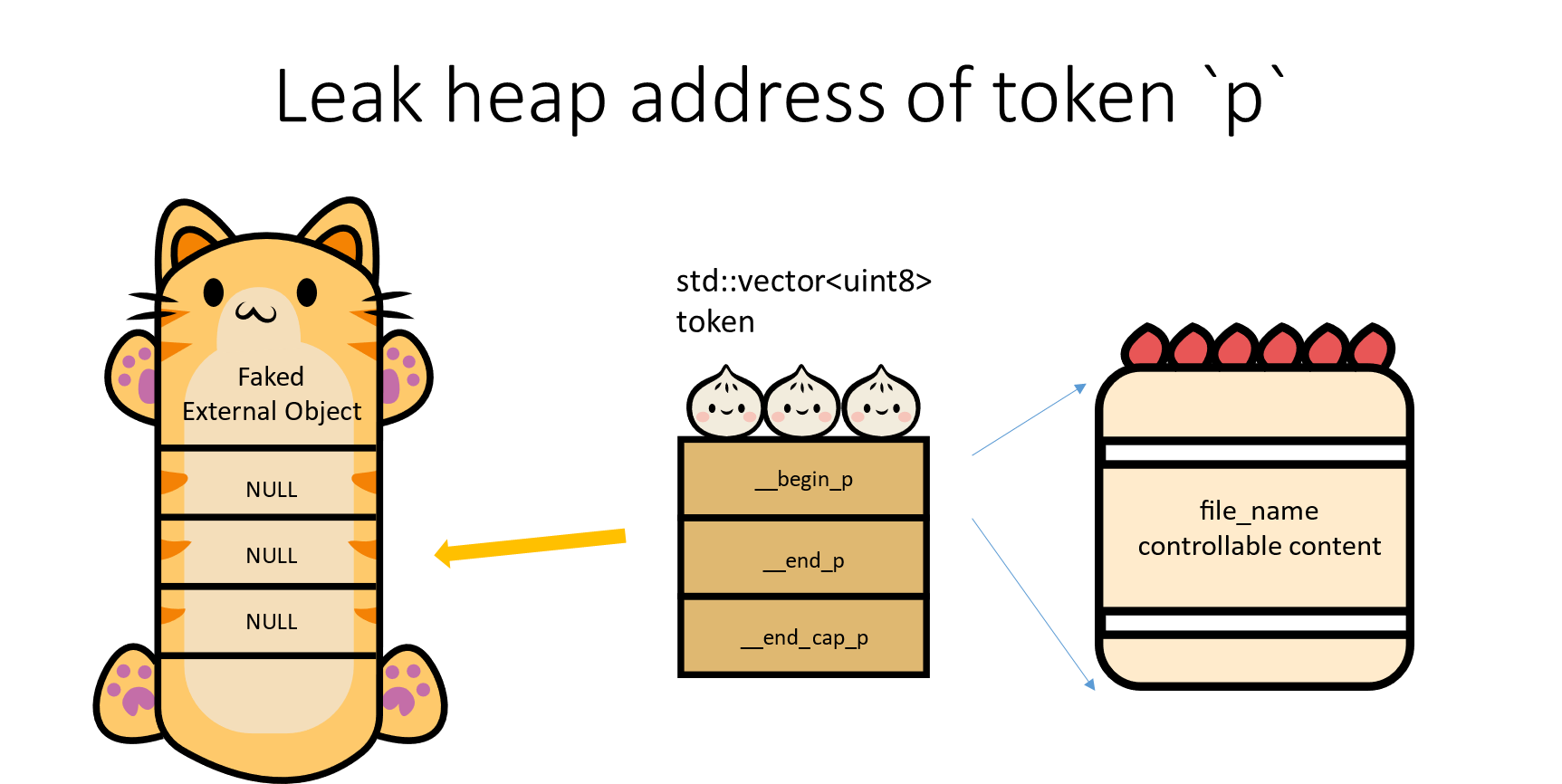 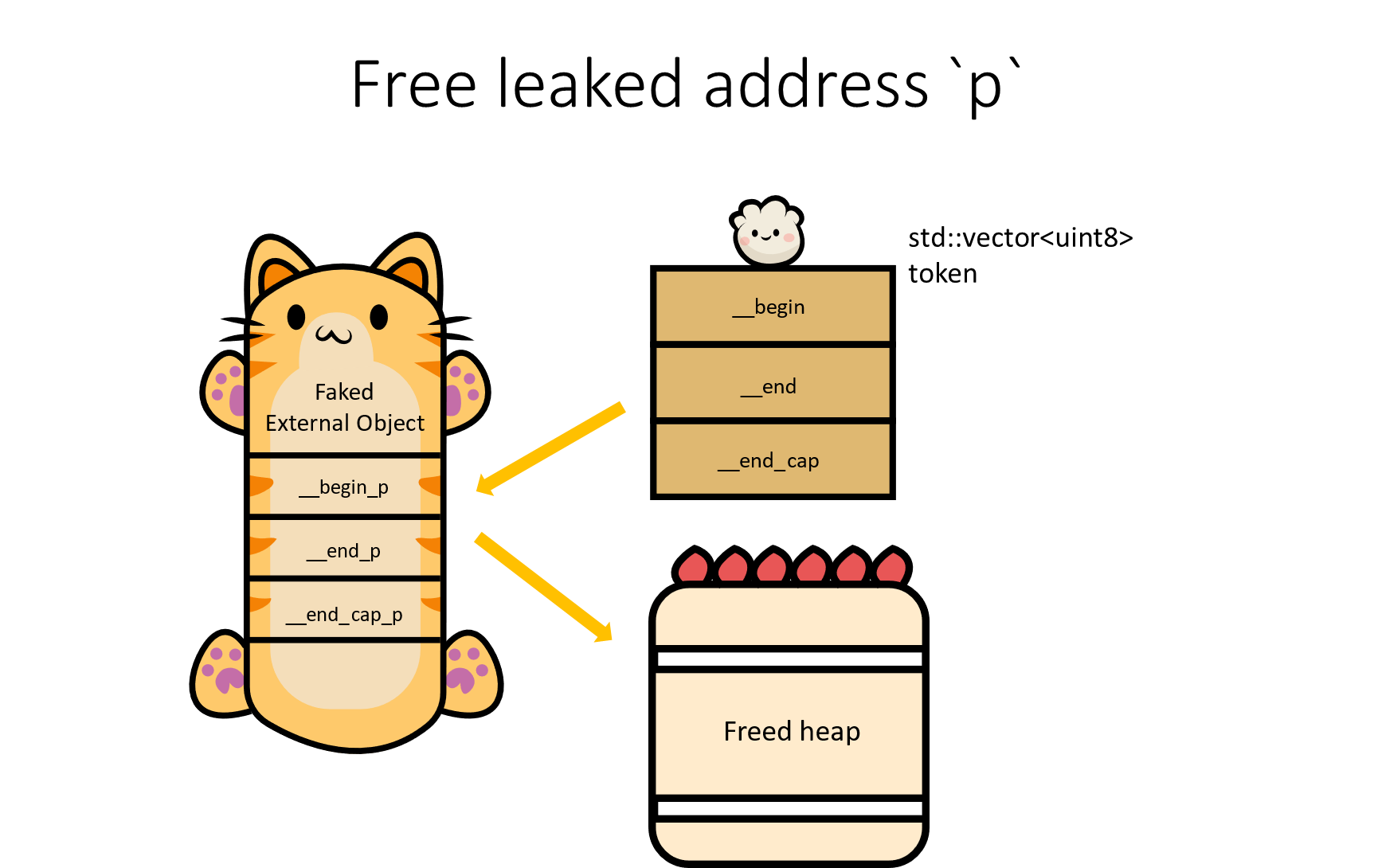 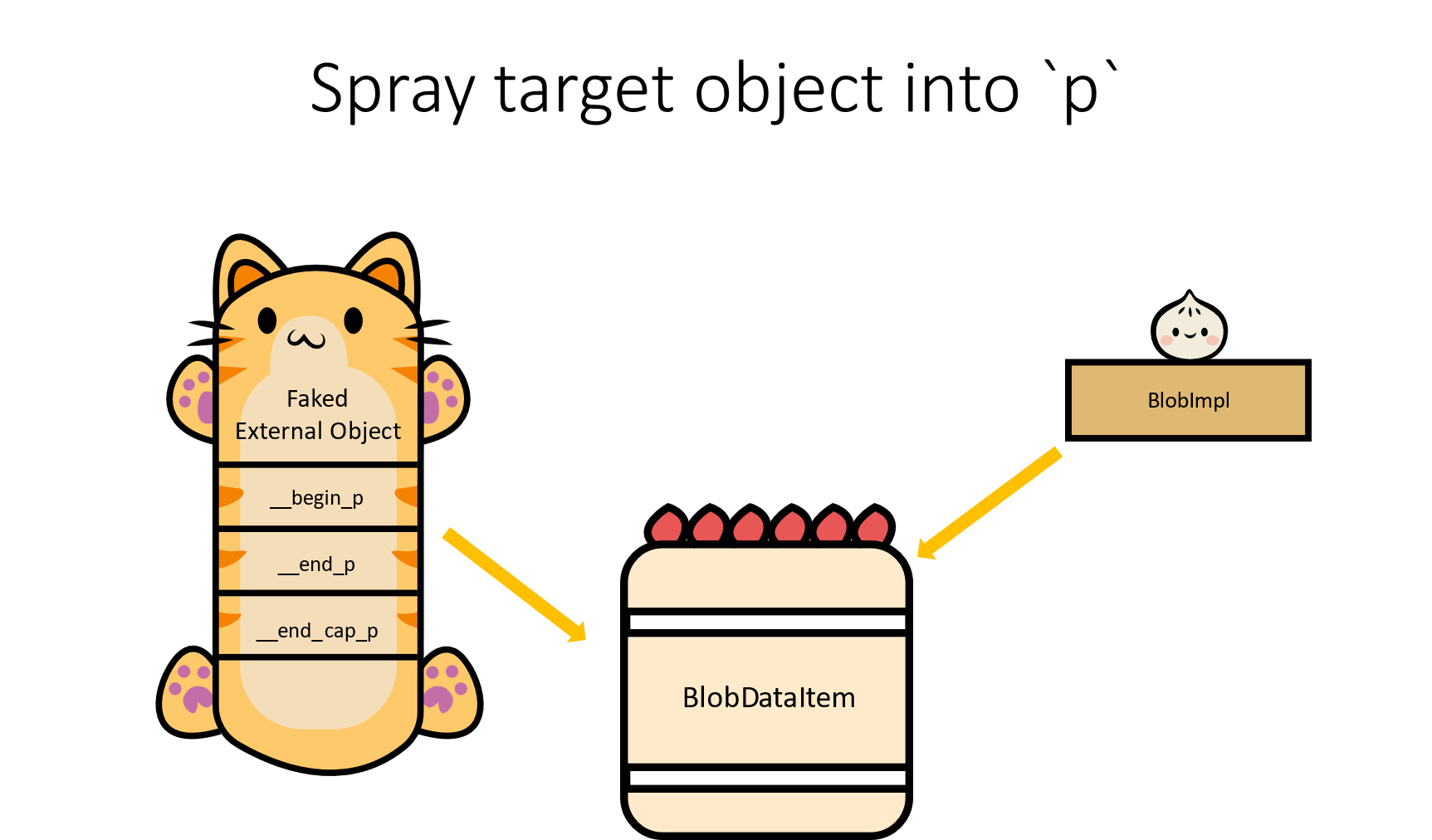 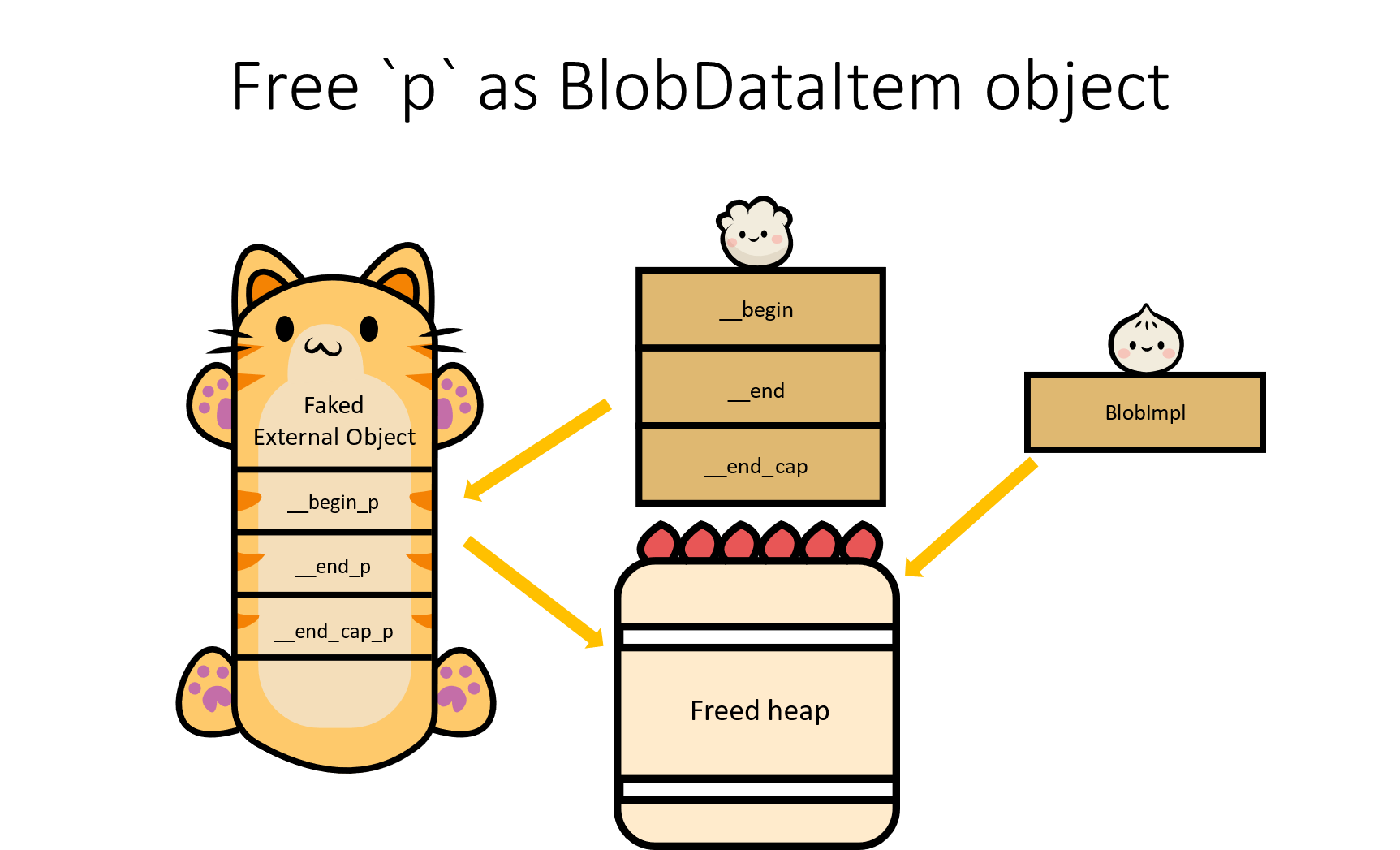 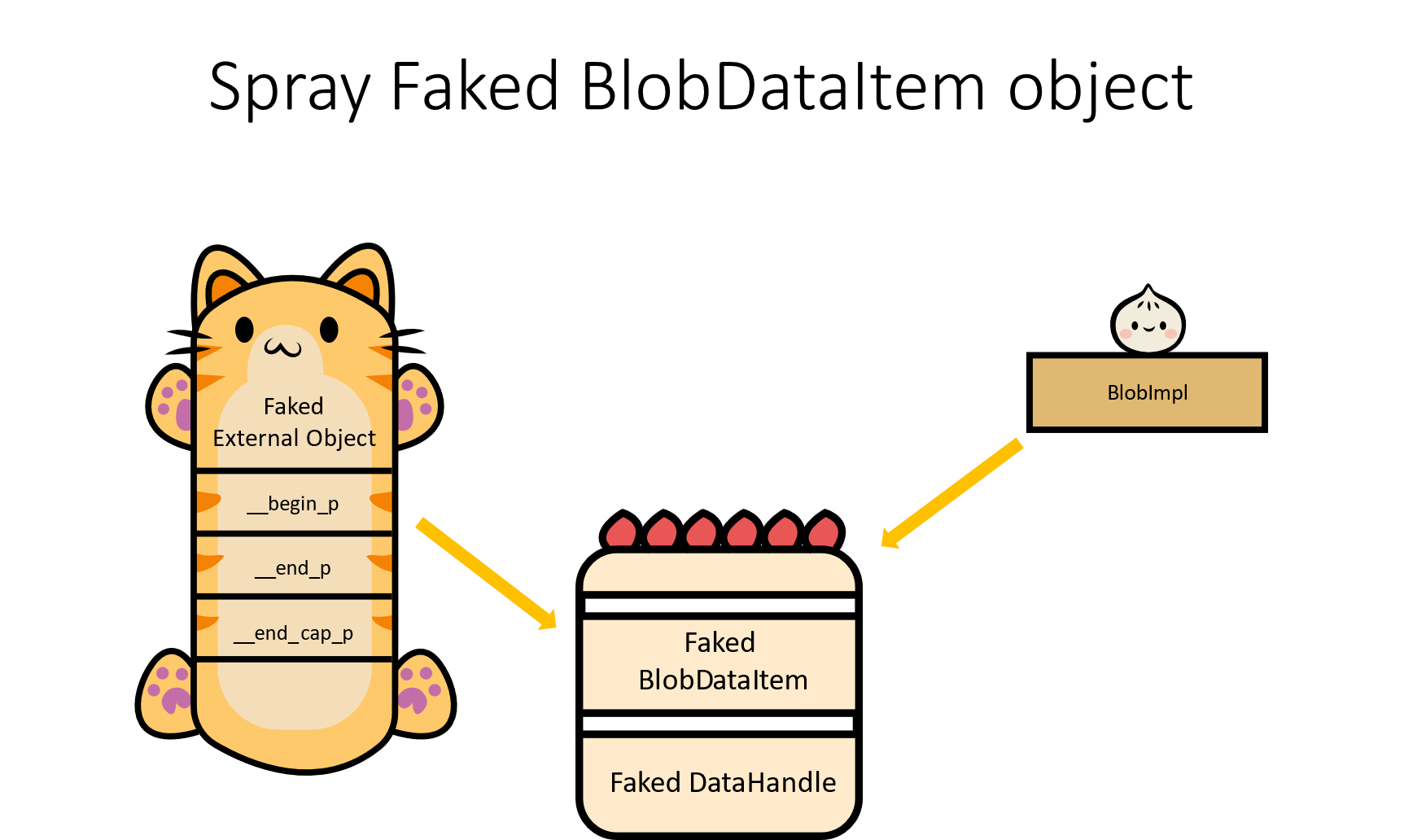 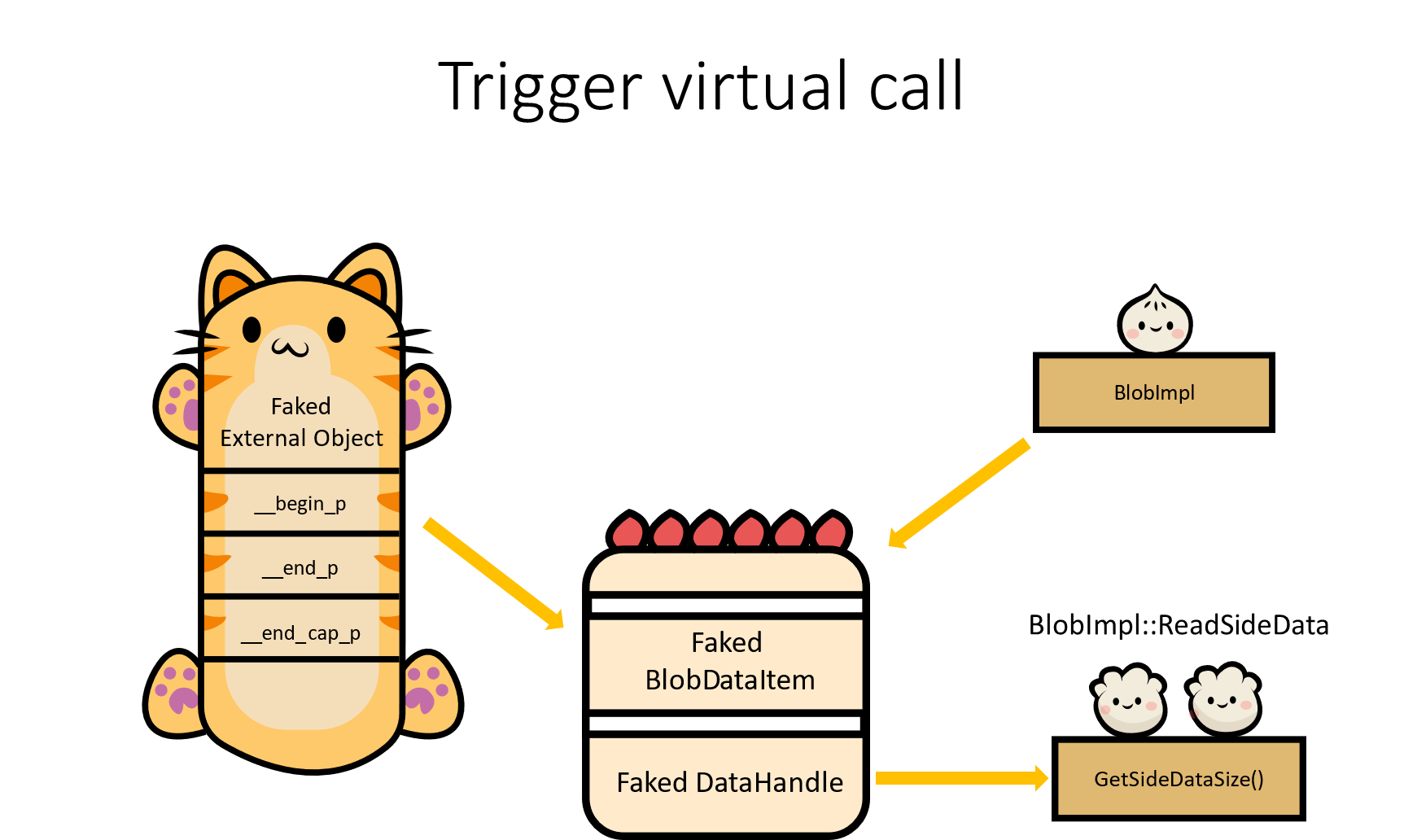 It’s quite compelling when we can create another UAF of any object, but this scenario comes with some issues as well.

In creating the target object, noisy objects can be created along with it, which will then make it difficult for us to spray target object into hole p.

In addition, target object should be easy to call a virtual method, so that we can control rip. In our exploit, we chose spray BlobDataItem object with size 504 (0x1f8). It is not difficult to spray and we can fake a BlobDataItem::DataHandle which can call ::GetSideDataSize() method as virtual call.

To make a fullchain exploit, I tweaked the CVE-2021-03632 PoC made by @Zeusb0X as RCE part. We will be turning that poc into read/write arbitrary and set enabled_bindings_ flag to enable mojo binding and trigger this exploit to bypass sandbox.

At the time of fixing these bugs, javascript binding of IndexedDB was not generated in default, so you have to generate it by yourself.

During the process of making the demo, I used some fixed address for testing against the vulnerable version. If we were to write the exploit for different version, you will need to write the parts for finding global address and rop gadgets.

The entire exploit code can be found on our github repo.

Finally, I believe there are many ways to exploit this vulnerability. The above scenario can also be turned into read/write arbitrary.

We are thankful to Google Project Zero, Theori, Github for their blogposts that helped us in understanding how to piece everything together.

No cats were harmed during the process of this blog post.

Last but not least, the author would like to thank his teammates (Frances, Bruce, Sung & Jacob) for their proofreading as well as assistance provided during this period taken to write the exploit and the blog post. Special thanks to Sarah for the cute cats and images