As part of my internship at STAR Labs, I conducted n-day analysis of CVE-2020-6418. This vulnerability lies in the V8 engine of Google Chrome, namely its optimizing compiler Turbofan. Specifically, the vulnerable version is in Google Chrome’s V8 prior to 80.0.3987.122. In this article, I will give a step-by-step analysis of the vulnerability, from the root cause to exploitation.

In JavaScript, objects do not have a fixed type. Instead, V8 assigns each object a Map that reflects its type. This Map is considered reliable if it is guaranteed to be correct at that specific point in time, and it is unreliable if it could have been modified by another node beforehand. If the Map is unreliable, the object must be checked to have the correct type before it is used. This is done by insertion of CheckMaps nodes or CodeDependencies. When trying to optimise, Turbofan aims to insert as few Map checks as possible, and tries to do so only when necessary (i.e when the Map is unreliable and is going to be accessed).

However, the side effects of a JSCreate node were incorrectly modelled, which could cause the Map to be marked as reliable even though it has been changed as a side effect of JSCreate. This resulted in a type confusion vulnerability, where the Map indicates a different object type than the one that is actually stored in memory. As such, when accessing the object, memory outside of the object’s allocated memory could be accessed.

This vulnerability was fixed in a V8 version from 2 years ago. Using the patch provided, we recreated the vulnerability in a more recent version of V8 to exploit.

Pointer Tagging and Compression in V8#

To distinguish between small immediates (Smis) and pointers in V8, pointer tagging is used. The least significant bit is used to mark whether a value is a pointer (1) or a Smi (0).

Since Smis take up 32 bits of memory, pointer compression was introduced to also make pointer sizes 32 bits on 64-bit architectures.

A 32-bit isolate root is introduced, corresponding to the starting memory address of a 4GB block of memory known as the V8 sandbox. The isolate root is then combined with the 32-bit compressed pointer to address 64-bit memory.

Since double values are still stored using 64 bits (8 bytes), an array of objects and an array of doubles will have different sizes, which is important for our analysis.

The vulnerability lies in the InferMapsUnsafe function in node-properties.cc. This function aims to determine if the Map of the target object (the receiver) is reliable, based on the “sea of nodes” internal representation in Turbofan. It traverses the effect chain [1] until it finds the source of the Map [2].

If when traversing the effect chain, a MapGuard/CheckMaps node [3] is encountered, it also returns the current result (the Map is guaranteed to be reliable from that point on because it is guarded / checked). If the node is known to have possible side effects that could modify the Map in question, the Map will be marked as unreliable. For example, if the kNoWrite flag is not set in a node, the node could change the Map, thus the Map would be marked as unreliable [4].

However, if a JSCreate node is encountered which is not the source of the Map, the Map is incorrectly not marked as unreliable [5], even though JSCreate can have the side effect of changing the Map of an object. This can be done by passing a Proxy as the third argument to Reflect.construct(), which is reduced to a JSCreate node in JSCallReducer::ReduceReflectConstruct in the inlining phase. Thus, the Map of the object is not checked after it is modified, leading to type confusion and heap corruption.

Exploitation of type confusion vulnerabilities usually begins with a out of bounds (OOB) read/write using arrays, because the element type determines offsets to access in the heap.

For example, if the array elements are objects, the offset is 4-bytes (compressed pointers), while doubles will have an 8-byte offset. When the Map is not checked after it is changed, the offset of the subsequent read/write will not change, even though the offset may be out of the memory range newly allocated in the heap for that object.

This out of bounds read/write can then be used to overwrite the length field of another array in nearby memory, allowing for a wider range of out-of-bounds accesses.

We will start with an array of doubles a. Currently, it has a 8-byte element size.

To achieve the initial OOB write, we use the Reflect.construct() call nested within an Array.push() call in f. The ternary operator provides a way to push in a user-controlled value to overwrite the length field.

We also declare a proxy p. This proxy will be called only when we want to trigger the OOB write. It changes a[0] to an empty object, which changes the type of a into an object array (4-byte element size). This will reallocate the array in the heap. Another double array oob_arr is also allocated which will be positioned near to a on the heap.

Firstly, we call the function multiple times, without the proxy, to trigger optimisation by Turbofan. The function is wrapped with an outer function main to prevent optimisation into a non JSCreate call, which occurs when it is the outermost function called.

During the multiple calls, the array size is ensured to remain less than its original size using Array.pop(), to prevent reallocation of the array in memory. 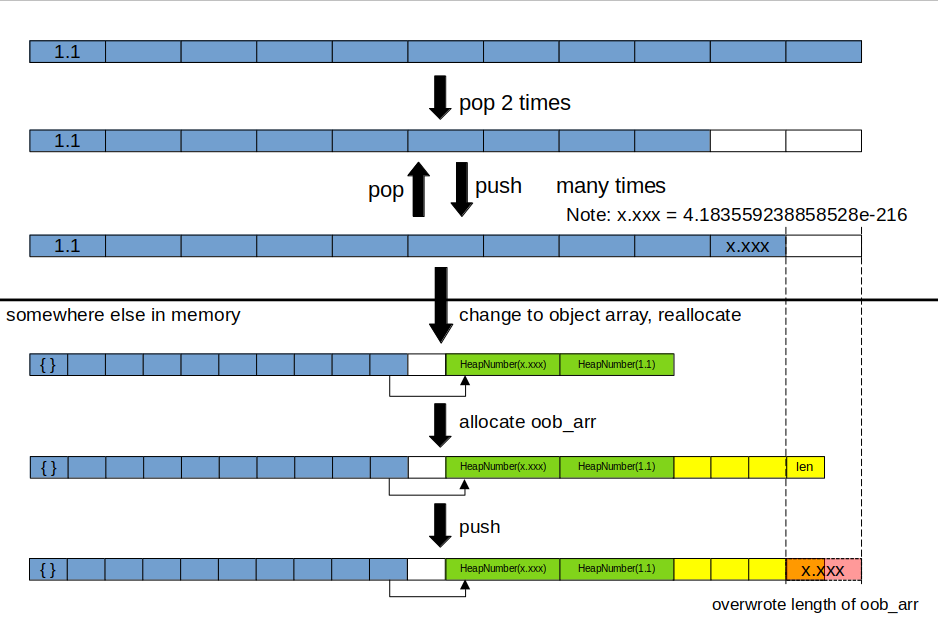 To demonstrate why the nesting is important in the exploit ( instead of having separate calls to Reflect.construct() and Array.push() ), I used Turbolizer to analyse graphs (effect chains) generated by Turbofan in the TFInlining phase, with and without nesting. I used the PoC provided in the original Chromium bug post. While this uses Array.pop() instead of Array.push(), the idea is the same.

In all graphs, the last three LoadField nodes represent the start of the Array.pop() call.

By overwriting the length of the array oob_arr, we can now perform further OOB accesses by accessing its elements. The most common step now is to implement the addrof/heap_read/heap_write primitives, which allow us to find the address of an object, and perform read/write on addresses in heap.

This is done by declaring two more arrays which contain doubles and objects respectively.

We also declare 2 helper functions to allow us to read/write 32-bit values at positions measured from the elements pointer of the target out-of-bounds array.

For the heap read/write primitives, we will overwrite the elements pointer of the double array with the compressed heap pointer to write to. We need to +1 to tag the value as a pointer, and -8 as there is an 8-byte offset between the elements pointer and the address of elements[0]. Note that since the pointers are compressed, we can only access addresses within the V8 sandbox.

This section is largely based off this blog post.

Since our version of V8 has V8 sandbox enabled, the common way of writing to a RWX page of WASM memory using the backing store of an ArrayBuffer will not work anymore, as the RWX page is located outside of the V8 sandbox and we can only write to addresses within the V8 sandbox using our primitives. Thus, we will use a different method.

When a JS function is compiled by Turbofan, the just-in-time (JIT) code will be stored within the heap (outside the V8 sandbox) as a R-X region, and a pointer to the start of the code is created.

If we declare an array of doubles within the compiled function, their 64-bit IEEE representations used for loading immediate values will also be stored as R-X in the heap.

The doubles are loaded into an array using mov instructions. Assembling one of the movabs instructions shows 49 ba 9a 99 99 99 99 99 f1 3f. By changing the doubles in the array, we can control executable code without needing to write to it.

Then, by overwriting the code_entry_point field within the CodeDataContainer object referenced by the JIT’ed function object to point to these doubles instead, we can execute the doubles as shellcode.

Since the doubles are separated in memory, we will need to use 2 out of 8 bytes for jmp instructions when crafting our shellcode. This means that we have a maximum instruction size of 6 bytes. Most of our instructions are less than 6 bytes, or can be manually converted to meet the size limits.

To JIT compile the code, it is called multiple times using a loop. However, this triggers garbage collection, which can cause our previously declared arrays to be reallocated. Thus, we do the JIT compiling before the rest of the exploit.

In addition, if any double values are repeated within the function, Turbofan will optimise away the duplicates, thus we also need to manually edit the shellcode (or assembly) to ensure the 6-byte sequences are unique.

For this exploit, we will be popping xcalc. It requires 22 doubles, but this can be reduced to 16 with some rearrangement and optimisations of the assembly instructions, which are not done for readability.

We have successfully exploited the V8 engine using the type confusion vulnerability.

The exploit is run with ./d8 exploit.js. The whole exploit can be found in this link.

We thank everyone for spending time reading this. Special mention to all my mentors, Bruce Chen & Đỗ Minh Tuấn & other team members Đào Tuấn Linh & Ngo Wei Lin for proof-reading it and giving some suggestions to make it better.